Just a little help from my tweets.

I was talking with a 20 something co-worker and made a offhand comment about Tianamen Square. He had never hear about it.

This blew my mind that he had never heard about one of the worse attacks on a people by a government in the modern times.

Quebec Votes Again
So here we are once again another election, the second in as many months.

Unfortunately, I can see the bi-annual elections feeding voter apathy and holding it on the coldest day since last winter is not going to help the turn out at the polls. It's freezing out there!!!

CBC has a great meet the leaders and parties page so if you have any last minute questions before heading out to the polls.

Only in Canada would you find people complaining about having to vote. We're so spoiled. 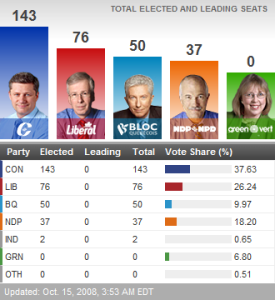 Election Results
Here are the results for yesterday's election. CBC has a really nice interactive map so you can see the break down across the country and find out who won in your riding.

For everyone who didn't vote… I don't want to hear any complaining till the next election.

As I was reminded by one of my VOX neigbours, today is the Canadian Federal Election and I am passing along the reminder as well.

No matter who you're voting for you only have till this evening to decide the future of our country for the next few years.

What's interesting is that the main three parties have also truing the the social media like their counterparts down south. You can follow Jack Layton of the NDP, the Liberal Party and Prime Minister Stephen Harper on the Twitter.

If you need some help deciding on who to vote for or who not to vote for, why not check out the main players sites to get an idea what they are about.

And swing by Elections Canada to see what pieces of identification you'll need at the polling station for instance.

Remember lots of people have died in horrible wars past and present so we can complain about how our votes don't count. Also, you might forget that our grandmothers or great-grandmothers couldn’t even vote if they wanted to. Don't waste this privilege and right. Get out there and vote!