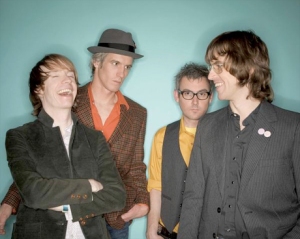 The new Sloan EP Hit & Run has dropped (as they say) and it’s pretty good.

If you’re unfamiliar with Sloan I’ll make the assumption that you don’t live in Canada but if you do… shame on you. And if you don’t live here you should move, I’ll wait.

Do yourself a favor and click play below and listen to the album as you read the rest of my review.
Sloan – Hit & Run

The title of the EP is most probably in reference to band member Chris Murphy being injured in a hit & run accident this past summer. That caused the group to cancel shows while he recouped.

As a long time fan it hits all the Sloan standards with tracks like Take It Upon Yourself, hand claps and all. It would have fit in nicely on their 1999 album Between the Bridges. It Is Never is pure Sloan awesomeness, but I’m a sucker for layered songs that build up to distortion endings that reprise the main theme. Plus I’ve always had a man crush on Patrick Pentland and his songs.

One of Sloan’s strengths can also be a weakness on a five song EP like Hit & Run. With four distinctive song writers the variation can be jarring switching between them. Jay Ferguson’s Midnight Mass is a perfect example of this problem. It’s a good song but sandwiched between two up tempo ones brings down the energy. Which is a shame since Jay Ferguson has done some really great songs with excellent lyrics and melodies over the years.

That said it’s a good addition to the Sloan catalog of memorable songs.

Sloan is offering the EP in MP3 320kbs, Apple Lossless and Flac formats directly from their site in addition to other music stores.

This is unreladed to the Hit & Run EP, but Witch’s Wand was one of my favorite songs off their last album Parallel Play but the video that I just got around to watching is so weird I have no idea what’s going on.

Because I have no time to post, I need help from my tweets.

I'm not going to lie, I went to high school with two of the guys in the band. That said, I defy you to listen to the track Bombs Bomb Away and not be singing it all day.

FYI, you can buy the album for a $1 cheaper and higher quality from their site as apposed to iTunes.

This cinematic trailer for The Beatles Rock Band game is breath taking. My tweet pointed to a G4 YouTube video but they have seemed to pulled it since this morning.

The animation is really elegant and (pardon the pun) really rocks. Of course it never hurts to have The Beatles as a soundtrack. 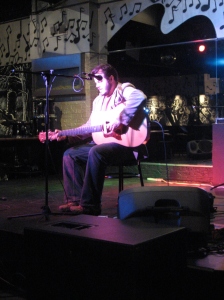 As I was out last night filling up the vehicles (gas being in the 85¢ range) I stopped by Bar Le Crossroads and caught a few songs from Adam Karch.

As days get warmer I can't wait to spend a night here or there out on their terrace, there had it open during the day but the nights are still too cold. 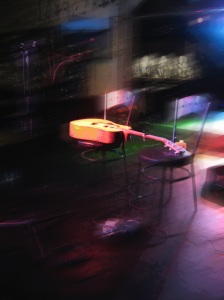 Adam Karch
Thursday I walked over to Bar Le Crossroads for the tail end of the Adam Karch acoustic set. FYI he starts at 8pm now on Thursdays.

It was nice to grab a beer since I had Friday off, and even better not freezing my ass walking there on account of the spring weather.

Adam Karch She Talk To Angels

Adam Karch You Can’t Always Get What You Want 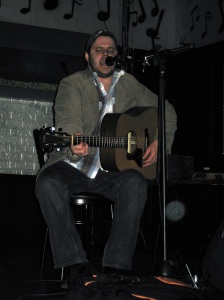 I started off my birthday long weekend by going to see Adam Karch at Bar Le Crossroads. That guy can play.

It was great to get out, have a few beers and listen to some live music. Something I certainly don't do as much as I would like to. Of course walking home at 1am in the cold was not fun.

Adam Karch Your Body Is A Wonderland 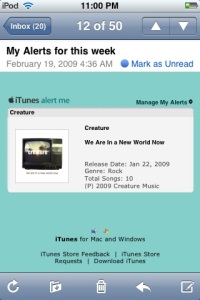 ITunes Alert email
iTunes randomly seens me alerts based on what I've bought or what I've asked it to alert me about (I'm not quite sure what the procedure is on this).

When I received an email telling me Creature, my fav Montreal band had a new album out I immediately purchased it on my iPod Touch on the way out the door in the morning.

Wow, I thought they really changed their sound and they even sound British now.

Well it turns out that this Creature is not that Creature. Got it, well I know I was confused.

This UK Creature is just on the fringe of what I'd go for. They are reminiscent of Radiohead (and I thought Elastica as well). It's a tad on the slow side for my taste. Most of the songs are melodic thought they do build throughout, which I like.

So it's not the end of the world but now I'm really looking forward to Creature's next album. 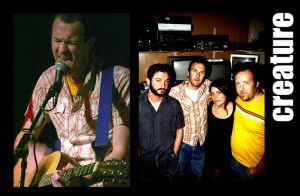 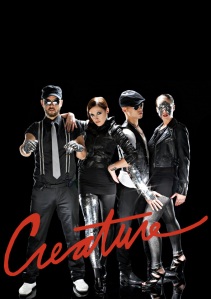 Last Friday to celebrate the end of summer / Labour Day weekend we had a corn roast at work. 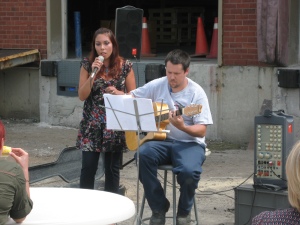 My co-worker Christ sang and I accompanied on my guitar. We only had two days to practice and I hadn't played so much guitar in three to four years. We only did three songs, but I believe in quality over quantity.

These are some other videos posted on YouTube from some of my co-workers. Wow, multiple camera show!

the format is stolen, but the views expressed are mine 😉 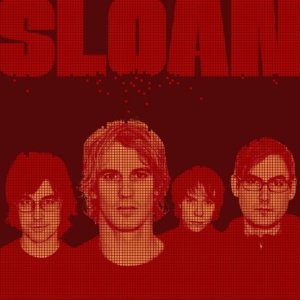 Sloan: Parallel Play. What can I say, I've been a fan of Sloan since High School (which for some reason keeps getting farther and farther away) and they are pretty much the only band I'll buy an album sight unheard.

That said, it's not their best album but there are some stand out songs.

They funny thing I'm usually a Patrick Pentland kind of guy but with Parallel Play most of my favorites are Jay Ferguson's songs (Sloan fans will get it). Great songs like Witch's Wand, Cheap Champagne, Believe In Me and The Other Side make great additions to the Sloan set list.

Sloan is a band that evolves and changes and Parallel Play is no different. As apposed to their '70's rock heavy past few offerings Parallel Play leans to an almost light rock late '60's & '70's feeling and even Dylanesque on Down In The Basement. Though there are a few rock ones like I'm Not A Kid Anymore for the faithful.

One thing I have to say I completely hate about the album and this goes for all of my musical purchases is that I don't want no demo's, live versions or reprises. This ain't high school and I don't want no double or triple spaced albums. You only have 13 songs? Great put those on, it's okay if it's a short album. But please no padding.

All in all a good Sloan album and one that pushes them out their safety zone of musical creation. 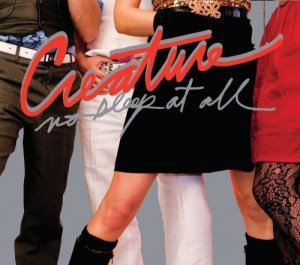 No Sleep at All

Creature: No Sleep At All. It's always nice to rout for the home team.

Montreal's Creature released their first album a few months ago and I got a free track from either iTunes or music.download.com, I can't remember. Either way, I got it and have really been enjoying the album.

They've been compared to Blondie and Talking Heads, but never really listened to them so I can't tell if that's a good comparison.

Personally I think they've got a bit of Elastica, a pinch of Daft Punk's sound and '70's & '80's funk and rock. That's the closet I can get, you just have to listen to them yourself.

I'd like to point you where you could hear them, but unfortunately there is not many places to catch them. iTunes seems your best bet to at least get a sample of the entire album. Their MySpace page would be better to hear some full length songs.

Most of the album is up tempo dance / rock songs with the second half slowing things down a bit. Not that there's anything wrong with that, just personally I would have liked a few more fast songs. It's still all good.

One thing I totally love about them is that they don't take themselves too seriously and like to fool around. They have the first four steps of their 12 step program to get your inner freak on posted on YouTube (along with another half dozen video sites) . My personal favorites are step 1 and step 4.

Wall•E. It must have been 10 years since I've seen a movie opening weekend.

I don't know who was looking forward to the latest Pixar film more, me or ET.

As usual a great film from Pixar. They did an excellent job telling a story when the main characters don't talk and can only emote though limited facial and body gestures.

The inclusion of live action footage was a little strange but certainly not the end of the world.

One little thing, if you've been watching the trailers you'll notice the catchy song used. Well, it's not on the soundtrack because it's not from Wall•E but Terry Gilliam's film Brazil. It's called Central Services / The Office.

Also check out Buy N Large's official site for more info on the Wall•E universe. And the free demo of the PC game. 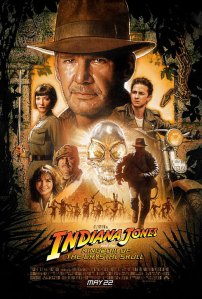 Indiana Jones: Kingdom Of The Crystal Skull. If it's been 10 years for me to see a film on opening weekend, then I have no idea the last time I saw two movies in two days.

The movie was okay and since it's been out for months I'm probably the last to see it .

What i did like, it gave Donna and I a chance to get out for a few hours alone. Now that's been a few years. 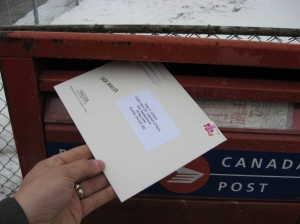 off you go
As I send my Guitar Hero 3 off in to the void I now count the days for it's return.

I hope I get one of those free faceplates that Activision is sending out to those of us who actually part with the game for a month. Yesterday I was at BestBuy and thought about picking up a second guitar but what's the point, I can't play it for at least 3 to 4 weeks. 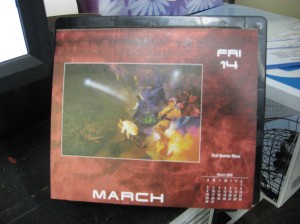 My wife got me a Star Wars a day calendar this past Christmas. I've been enjoying a small piece of the Star Wars universe residing on my desk at work for far this year. Much better than dogs and or cats in my opinion.

The strangest one I've seen so far is a painting of the main characters preforming as a live 1970's rock band. Of course it would have made perfect sense in the 1970's glam rock era. 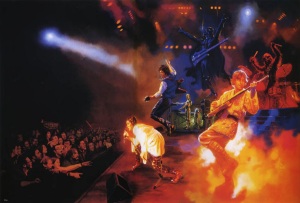