Best Buy
As other retail stores are adjusting their prices with the mighty Canadian Loonie in mind, Best Buy has followed suit.

It really freaks me out sometimes, I still add the difference to American prices. It's going to be years for me to get used to this.

Future Shop is lowering prices to reflect the strong Canadian loonie. I guess I should have waited before complaining about the difference in prices. Oh well. It's nice not having to do price conversions in my head on the fly when I'm listing to Twit talk about a new tech product.

Hbc.com – Nintendo® Wii™ Console
I know that there will be no official price cut, but if you hurry and they have it in stock (yeah right) you can snag one at Zellers for $20 off. So now it almost costs the same as in the US even as the Loonie is kicking ass and taking names. 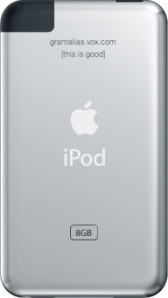 Touch this is good

After yesterday's visit to Futureshop, I'm still really excited about the iPod Touch. So I've been doing some research on my possible future purchase and I'm a little annoyed.

Last time I checked the Canadian dollar (aka the Loonie) was trading higher than the American dollar. Did retailers not get the memo? I know there's more to it than that, I'm just choosing to ignore economics, market forces and international money markets. Ok?

Thinking I'd save $30 over on the US site I discovered that they don't ship to Canada. Damn you Steve!

Just another example of Apple playing to the home town crowd. Maybe they would have a greater worldwide market share if they didn't subsidize sales at home at the cost of foreign consumers.

Of course when and or if I ever get the Touch, hopefully  I won't have to wait very long for 3rd party applications. All praise the mighty SDK.

Loonie Buck
Back in the late 80's and early 90's cross boarder shopping was rampant mainly due to the almost 90¢ to the American dollar exchange rate. I own my double cd of the Lamb Lies Down on Broadway to a family trip to the USA.

At the time my father told me that when he was young the Canadian was worth more than the US dollar. That's impossible right? This was the United States we were talking about here, the most powerful economic power in the world. Even Communists used the American dollar.

So jump ahead to today.

The Canadian dollar is at a 30 plus year high and briefly gained parity against the American dollar. Insane!

According to Finance Minister Jim Flaherty one reason for the upswing in the Loonie is the current economic state of the US. But one might think that the current housing and credit crunch could be really Bush's fault? You've got to love politicians sensitivity to real people trying to make ends meet.

There are certainly other implications to a high Canadian dollar and cbc.ca talks about them in this article.

The great thing is that on my next cross boarder trip I no longer have to do currency conversions in my head. I'll know for sure that's I'm paying too much for that Old Navy graphic tee.

If you would like to learn more about the history of the Canadian dollar, visit this PDF the Bank of Canada has put together.