If you have ever talked to me about digital photography I will have told you that you need to have a back-up plan. I use the 3 – 2 – 1 back-up strategy. 3 copies, 2 different media, 1 off site. You can Google it, it’s a thing. It’s on Lifehacker! Auto Backup from Google and Picasa is a free and simple tool that will help you protect those irreplaceable photos and videos.

This recent update to Picasa, Google’s PC / Mac photo organizer (which I have been using for years and so should you) has added Google+’s Auto Backup to Picasa. So what’s the big deal? Google Auto Backup gives you 15GB (part of your Google Drive total) of storage for photos larger than 2048px on the longest edge, smaller than 50MB and videos longer than 15 minutes at 1080p resolution or higher. Now that pretty much covers almost everyone I know.

If you’re like me with over 110,000 photos and videos that’s just short of 900GB  the 15GB will be insufficient. So if you’re willing to have the photos downgraded to a 3MP image (2048px along the longest edge) Google+ Auto Backup will give you unlimited storage. I think that is a fair trade off to have an automatic incremental backup solution.

You need a Google account, so if you use Youtube, gmail or Google+ you already have one (as Google has unified their services under one log in). An Auto Backup application is installed running in the background and backs up your photos and videos. Keep in mind your monthly cap before starting the backup process, we don’t want those nasty overage charges.

It will find the default places on your hard drive but if like me you a few internal drives you have the ability to chose and pick folders across multiple drives. All your photos and videos are stored in your Google+ account and are private until till you share them. If you have a modern mobile device Auto Backup will also backup your photos in iOS and Andriod devices using the Google+ app. 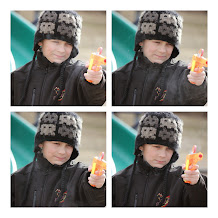 Auto Backup will also does Auto Awesomes. These include animated gifs, panoramas, HDR and a host of other automatically processed features and you can still revert to the original photo. Some basic photo editing tools and filters are included for good measure.