I don't know how many of my fellow VOXer's read Team Vox's latest post but there is now a free version of Typepad called Typepad Micro.

I'm guessing with the prevalence of Twitter (@grantalias), Six Apart wanted to get into the micro blog / status site. We all knew this was eventual since their acquisition of Pownce's earlier this year.

I've done a test post on my Typepad Micro so you can see what it looks like.

You can have links to all your online sites like flickr, Vox, Facebook & Twitter. Those of us from Vox will find it very familiar. I wish it could automatically pull data from those services. It would certainly save some time for the user.

Unfortunately (like Vox) you can't pull Facebook photos but unlike Vox you can't pull photos from any service or video sites for that matter (which you can do on Vox), unless you use embed code. Unlike Twitter there isn't an ecosystem of third parties developing sites like Twitpic to close the short comings.

The only real saving grace is that you can use the Typepad iPhone app to post while on the go (which is how I composed my first post).You can link it to both Twitter and Facebook with manual or automatic posting to each service as you wish is nice. To bad it won't cross post to my Vox account. Too bad there is not a Vox app like this. And no Blog It does not count. Don't even get me started there. 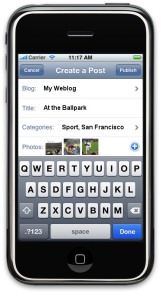 Since it's Typepad you can import and export your blog to or from it. With Vox there is no such ability and I'm pretty much screwed if I ever want to move anywhere else.

I've discovered that you can seemingly cross post from VOX to Typepad Micro (along with other LiveJournal) . I have not posted enough to actually see it work but some of you might find it interesting. My main goal was to see if I could then export my posts, but it doesn't seem possible. Maybe it's only for the paid version. 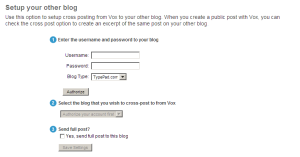 Here are the directions