Monolopy Here & Now World Edition
Thanks to all my FaceBook friends for bringing this to my attention.

Earlier this year, Hasbro held an online vote as to which world cities would be included in the new Monolopy Here & Now World Edition.

Today it was announced that Montreal tops the list of the new game along with fellow Canadian cites Toronto and Vancouver. Only China has the same number of cities represented on the new board layout.

While I am excited and can't wait to buy this version, I do realize it will quite a few years until we can play as a family around the dinner table. 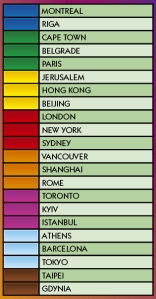 I understand that modernization of such a classic is inevitable but I feel nestoligic for some of the old mainstays left behind in the name of progress. The paper money and the time it took to count out what was owed is now replaced by an electronic debit system. So long to Water Works and Electric Company and hello to Wind Power and Solar Energy. And passing Go now fetches you a two million dollar payday.

On the other hand, than debit machine better do me some good when it comes to figuring out the Luxury Tax and the mortgaging of property when you are dealing in the millions. Thanks mom for all those years of math help.

Did your city make the game? Any you think shouldn't have?

Beijing might have got the Olympics, but Montreal got Monopoly!